Last year has been really tough for everyone. Recently announced threat of the new virus variant has made people even more restless to find a new source of income that would at least ease the worry of financial instability. A common New Year’s Resolution would focus on how one could earn more in a short span of time, hoping to find comfort, security and complete joy in the things they wish for. Probably, a new business, shifting careers, or if you are a single person, the top of your bucket list would be promising yourself to be exiting the singles club this year. Right? Sounds witty, but it’s true. People are busy exerting every effort to find what they think would give them the greatest joy and satisfaction in this life. And perhaps you have done all that you could have in the past year, just to meet that good life you have always wanted, that joy you truly long for, but sadly, ended up with a shrugged shoulder for another wasted year; regretting and wallowing in self-pity; living in a lie; hiding tears behind every smile; feeling incomplete and unhappy.

But you know, through all this time, we may be busy with many cares in this world, yet God is still inviting us to the real joy, not a little joy nor a fake joy, but an incomparable Great Joy that only He can bring.

Not a Fake Joy

While there is nothing wrong in pursuing our personal goals and dreams, we need to understand, that the joy Christ is offering is incomparable with what the world has to offer.

“This joy is not founded on fables and myths nor on false securities and material things but on God’s promises and their fulfillment.” – (Quits Sabio – SMEC Sermon, “Glory Not to be Feared but Enjoyed- Dec. 27,2020).

Jesus is promised all over the Old Testament. When He came to this world in a real time, in a real place, He truly suffered, died and rose again. When He died, He Himself bore our sins in his body on the cross (1 Peter 2:24), so that whoever will repent and come to Him will no longer live in sin but in righteousness, experience that real joy and peace with God.  Jesus even assured His disciples of this kind of joy that can never be taken away (John 16:22).

God is not a Despot

God demands and commands us to love Him with all our heart, soul and mind and strength, which only means that our greatest and ultimate satisfaction and enjoyment should be in Him alone. Hence, prioritizing and desiring things over God, by putting our hope and joy in the things that won’t last, instead of putting our Hope in Christ Who is eternal, is a sin.

Now, with these in mind, one might think that our God is like a dictator king who instills fear on His subjects for them to obey. But that’s not how our God is. Our year-end Sunday sermon entitled “Glory of God not to be Feared but Enjoyed”, was a timely new year’s message that brings a paradigm shift in people’s understanding of God. It was made clear to us that His ultimate aim for His people is to enjoy Him rather than glorifying Him in mere fear. The passage given was an awesome event in the Bible that is normally ignored and overlooked by many, even during the Advent season. We can find it in Luke Chapter 2 verses 8-20 where there were shepherds whom the angels appeared to with the Great News of Great Joy: the birth of the long-awaited Messiah that has come to save His people, our Lord and Savior, Jesus Christ.

This message has great implications in our lives as Christians and it’s meant to be shared. Of course, it’s not just on December 25 when we should ponder about these things, but as the old creed says, “The Incarnation of the Son of God is too big a thing to appreciate in just one day. Indeed, it’s something the Christian will celebrate for all eternity”- (John Piper – Great News of Great Joy).

In the sermon, it was summarized in three words: Fear, Joy and Glory, which refers to the progress that we Christians must have in regards to how we are to respond to the Gospel.

So, first, let’s talk about ‘Fear’. We are aware that the shepherds in the story were first filled with great fear as the angels appeared to them. This immediate response towards angels or God has happened in many other events in the scripture as well, and we have learned that it is normal for us, people, who are sinful in nature to fear God’s Glory. In fact, in the old testament, the Glory of God is always something to be feared. And that is a result of a sinner seeing God’s Glory, for God in His holiness, cannot tolerate sin (Psalm 5:4/ Habakkuk 1:13). But God does not want to be glorified through fear alone. Rather, He wants us to enjoy Him and not be paralyzed by fear or mere amazement, because the Gospel gives freedom through a message of joy. This is God’s way of setting His people free from the bondage of fear and sin (Hebrew 2:14-15).

And yes, indeed it brings great joy, which is very evident from the response of the shepherds when they went with haste to the place where Jesus was born. Though they were frightened at first, they did not stop there. Instead, without question or doubt, they believed in what the angel had said,

“Fear not, for behold, I bring you good news of great joy that will be for all the people. For unto you is born this day in the city of David a Savior, who is Christ the Lord And this will be a sign for you: you will find a baby wrapped in swaddling cloths and lying in a manger.”(vs.10-12)

After witnessing the great news, the shepherds returned, glorifying and praising God. (v.20) And notice, their final response to this great news was not to fear, but instead they were filled with joy which then resulted to praise, Glorifying God!

Great joy is the ultimate or final motivation in praising God as we learned in the sermon. Though there is benefit in fearing God and He can also be glorified through it, He didn’t come to just hunt, threat or instill fear to rebels like us. But instead, He brings the good news to whoever will accept His offer of salvation and is willing to be subjected to His kingship. It’s like an illustration of a King who came and offered a peace treaty to His rebellious people, a peace treaty that He Only can initiate. Yes, certainly God alone can initiate. He deserves the proper response of praise from His people with whom He is pleased: His people who enjoy and delight in Him, not because we can add to His inherent Glory but because we are to ascribe glory as the angels and the shepherds ascribed the highest honor and Glory to God.

Finally, let us also remember in the message that praising God completes our enjoyment with God. It’s the peak of our enjoyment. Because He is awesome! He is an amazing God who wants us to know Him and make Him our greatest treasure in life. Like the shepherd, may we not also fail to see His Glory that is to be enjoyed.

As how John MacArthur said in his video entitled: How to know I am a chosen one?, he said, “the purest joy in the Christian life comes when we are obeying Him, loving Him, serving Him, worshiping Him, that’s when we enjoy the most assurance.” And that is true. Sadly, many professing Christians just obey God out of fear. They reduce the gospel as an escape from hell and an entrance to heaven as an end in itself rather than as a means of enjoying and loving Him. They pursue their greatest joy and delight in material things rather than the giver of life and the source of everything.

Understanding this kind of joy, this incomparable great joy that our Savior brings to His people, is the best message to carry on not only this year but all our lives. So, as the angel said, “Fear not!”, let’s not also live in fear and do nothing. Instead, let us ponder and treasure this good news in our hearts and proclaim the incomparable great joy that is only in Christ Jesus, our Lord. 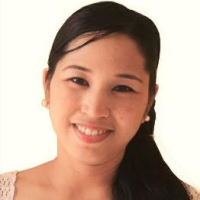 Maricar grew up in a Christian family where she also experienced teaching in Sunday school for kids. As she traveled abroad and continue to be part of different ministries, God has helped her to see unbiblical beliefs and practices in the church through her husband. Since then, she had this strong desire to learn more about it and to be able to share the various truths that she has gained as she continually learns. A mother of two lovely daughters and wife to Peejay, currently under the guidance of Sovereign Mercy Evangelical Church.